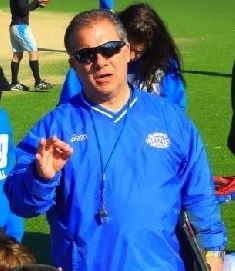 Mike is the Executive Director of Downtown Giants Youth Sports and co-founded the Downtown Giants back in 2006. Mike is also Director of the tackle football program. He has been involved in youth sports in lower Manhattan for over 30 years. Mike has worked with and coached D-1 athletes in all four major sports; football, basketball, baseball and hockey. The tackle program has grown into one of the best youth tackle programs in NYC under Mike’s direction. There are currently over 30 DTG alumni playing HS football in some of the top high schools in NY and NJ; some are being recruited right now by some of the top D-1 colleges in the country. There are currently 15 boys playing college football right now that Mike has worked with. Mike has coached and worked with close to a dozen DTG football players who have graduated from Ivy League schools over the last three years. Mike also spent 25 years in the financial sector, retiring in 2009, working for two companies, Merrill Lynch and Credit Suisse. Mike is a graduate of Fordham University. He is currently on the Varsity football staff at Xavier High School, where he played and graduated from. Xavier is also where Mike started his coaching career, back in 1981. Mike is also currently coaching girl’s Varsity basketball at the Notre Dame School of Manhattan. He has served on the Board of Directors of four different youth organizations in Manhattan. Mike is a life long resident of lower Manhattan; he and his wife have raised 3 boys, Peter, John and Michael, all three are DTG coaches. And all three have played for Mike.